East Hampton, New York – Ross steelman shot a first round of 70 and took the individual lead, and Georgia Tech sits second Monday night after play was suspended due to darkness in the second round at the Hamptons Intercollegiate.

The Yellow Jackets shot 3 over par 291 in the rain-delayed morning round, and are 6 over par for the tournament at the turn of Round 2, five shots behind leader Northwestern (+ 1). The Wildcats also shot 291 in the first round and were 2 under par in the second round when play was halted. Tech and the Wildcats split the team lead after the first round.

Neither team was below par when play was suspended, and only two individuals were in red numbers on the 6,742-yard Maidstone Golf Club course. The second round will resume at 8:30 am Tuesday, with the third round starting immediately after with a shotgun start.

Freshman Benjamin Reuter was tied for sixth individual place when play was suspended on Monday night. (photo by Todd Drexler)

Tech’s victory at the Maui Jim Intercollegiate, in which the Yellow Jackets broke the team’s record for a low score on 54 holes (796) elevated the Jackets to 8th in the Bushnell Coaches poll and 3rd in the Golfweek / Sagarin index. . Three Jackets – Lamprecht, Forrester and Steelman – were ranked in the top 50.

Lamprecht finished in the top 10 in the Maui Jim and Windon. At Maui Jim, he posted a record score of 194 (-16) on 54 holes en route to second place. Howe tied his career best result with his seventh tie at the Windon Memorial. Forrester tied for sixth and Steelman tied for ninth at Maui Jim.

TECHNICAL RANGE – Steelman had five birdies and three bogeys on his way to his morning round of 70, and the junior from Columbia, Missouri, scored two birdies with a 10-hole bogey in Round 2 to take a two-stroke lead.

First-year student Benjamin Reuter (Naarden, Netherlands) shot 74 in the morning and was 1 under par in the afternoon, sitting tied for sixth place individually, while junior Connor Howe (Ogden, Utah) is tied for 12e place at 3-on-par.

The six Tech golfers, including the seniors Ben Smith (Novi, Michigan), who competes individually, is one of the 30 best players in the individual ranking. Smith shot at par 72 in the morning and is tied for 20e at the peer level, while Christo Lamprecht (George, South Africa) and junior Bartley Forrester (Gainesville, GA) are tied for 26e. 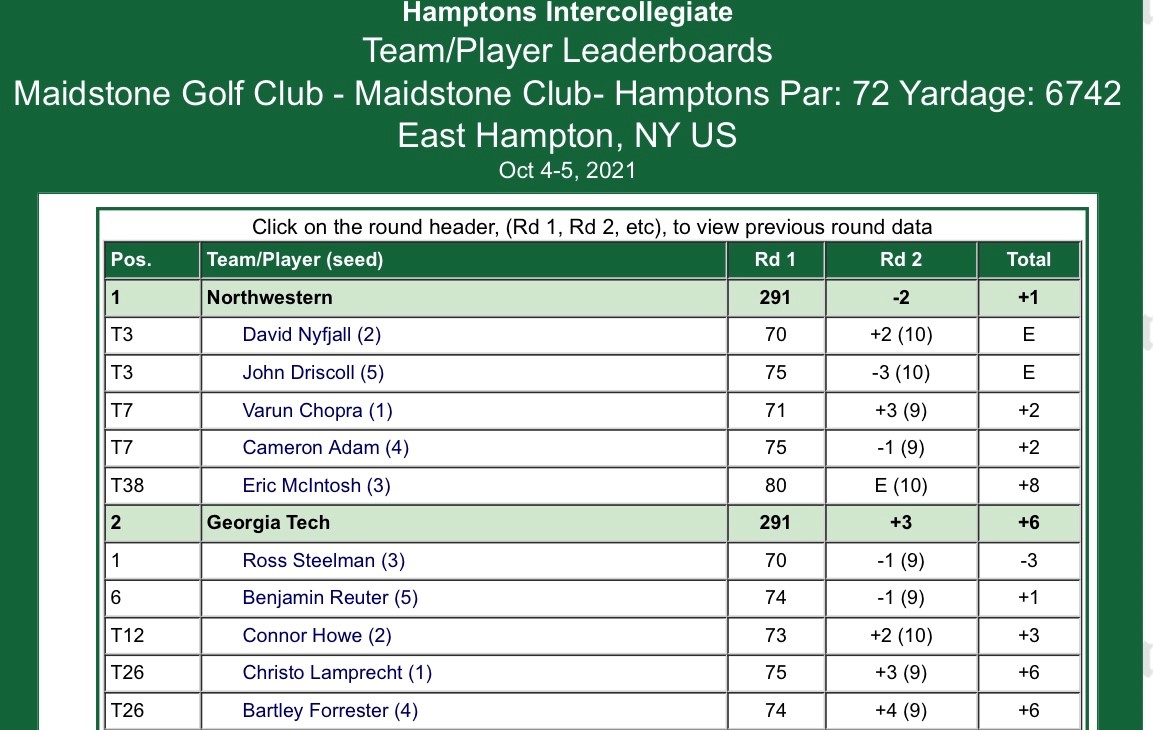 TEAM RANKING – One of two under-par teams for Round 2 (-2), Northwestern has a five-stroke lead over the Yellow Jackets (+6), with both teams having completed 10 holes in Round 2. Virginia (+9 ) holds third place, followed by Liberty and Duke, each 10 above par. The Blue Devils were 4 under par in the second round when play was halted.

Loyola of Maryland is the next closest team, sitting in sixth place at 20 above par.

INDIVIDUAL RANKING – Steelman (-3 to 27 holes) leads with two shots over Chris Fosdick of Virginia (-1 to 28 holes), who was 3 under par for his afternoon round.

Three players – his Northwestern teammates John Driscoll and David Nyfjall and Duke’s Luke Sample – are even tied on 28 holes and tied for third place, followed by Reuter of the Yellow Jackets, who is alone in sixth place at 1 on the par on 27 holes. .

“The weather conditions were brutal at the start, but I thought we played the hard holes well, and we regained a lot of ground in the last nine, where there are three par 5. We did not reach those in the third. round, so the scores don’t mean much at this point. Ross has played really well on the golf course so far. “

Georgia Tech’s golf team is at its 27e year under the direction of head coach Bruce Heppler, winning 66 tournaments during his tenure. The Yellow Jackets have won 18 Atlantic Coast Conference Championships, made 29 NCAA Championship appearances and were national finalists four times. Connect with Georgia Tech Golf on social media by liking their Facebook page, or following Twitter (@GTGolf) and Instagram. For more information on Tech Golf, visit Ramblinwreck.com.