The Dax struggled in European trading this morning as stock markets slipped. This week’s brief rally ran out of steam after soaring UK inflation figures and falling commodity prices added to the flutter around monetary policy tightening. The Dax tumbled along with European equities, while safe-haven assets including the US dollar, Treasuries and the yen rose. The markets seem to be oscillating between fears of recession and fears of inflation. Citi Group shared today’s recession chatter, noting that the odds of a recession are now closer to 50%, while saying that if a recession does occur, it could well be a ” garden variety”.

Earlier today we received feedback from European Central Bank vice-president, Luis de Guindos who once again reiterated the position of the ECB. The ECB vice president said the size of September’s rate hike will depend on inflation expectations, as he hopes inflation will start to subside after the summer.

With the DAX struggling this morning, it’s no surprise that all sectors were in the red, led by healthcare and basic materials with losses of 2.65% and 2.36%. No notable gains to speak of, as BASF suffered on comments about an expected slowdown in the second half of 2022. The stock is down about 5% on the day.

From a technical standpoint, we had a bearish candlestick (weekly candle) last week that closed below the key Support this turned resistor in the 13270 area. After two days of bullish price action, we had a shooting star candle close on the daily timeframe, retest and close below the 13270 area.

We saw a push down today that currently looks like a bearish engulfing candle stick pattern forms. We will need a daily candle close to previous monthly lows in the 12960 area. A break below could open a retest of year-to-date lows around 12450.

The FTSE fell more than 1% on Wednesday after inflation in the country hit a four–decade high in May, adding further pressure to the Bank of England (BOE) to raise interest rates, while falling crude and metal prices sent commodity-related stocks tumbling. Great Britain the consumer price index has risen at 9.1% in May, compared to 9% the previous month. Prices rose 0.7% in the month alone, a slowdown from the 2.5% pace recorded in April when the 54% cap on energy prices went into effect.

Soaring inflation will put further pressure on household budgets to tighten, intensify demands for wage increases to offset rising prices, and make it more difficult to resolve labor disputes such as railway strikes which continue tomorrow.

The FTSE’s losses this morning were exacerbated by energy stocks which are down 3.06%, while basic materials are down 3.7%. Notable movers in the FTSE 100 included Melrose PLC, closely followed by Avast and Glencore with gains of 3.7%, 2.2% and 1.9% respectively. Among the notable moves this morning, we had a bunch of energy stocks all struggling with companies like BP and Shell posting losses of 2.9% and 3.5%. Ocado Group PLC and Rolls-Royce Holdings PLC led with losses of 7.2% and 5.6% respectively. 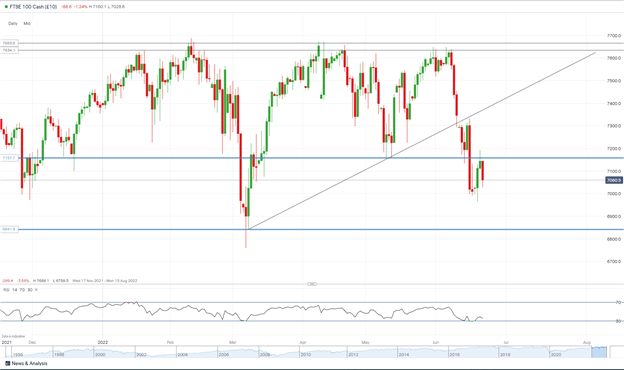 The FTSE failed to sustain momentum as yesterday’s daily candle closed below our 7150 resistance zone, while leaving a bullish wick. We have since retreated from resistance to hover just above the key psychological level of 7000.

Should price pressure return below the June 20 lows at 6965, we could drop lower and retest the year-to-date lows around the 6800 area.

US stocksstruggled in pre-market trading as market sentiment deteriorated this morning, with safe-haven assets benefiting accordingly. The Dow was down about 1.4% (440 points) in premarket trading.

Jhe day will be primarily devoted to US Federal Reserve Chairman Jerome Powell’s two-day testimony before Congress.Investors will be looking for further clues as to whether another 75 basis point rate hike is on the cards at the Fed’s July meeting, amid uncertainty over whether aggressive monetary tightening to combat the High levels of inflation will force the US economy, the main engine of global growth, into recession.

The only bright spot for the US economy this morning came from a senior administration official who confirmed that President Joe Biden will ask the US Congress to temporarily suspend federal fuel taxes to help maintain record prices. . 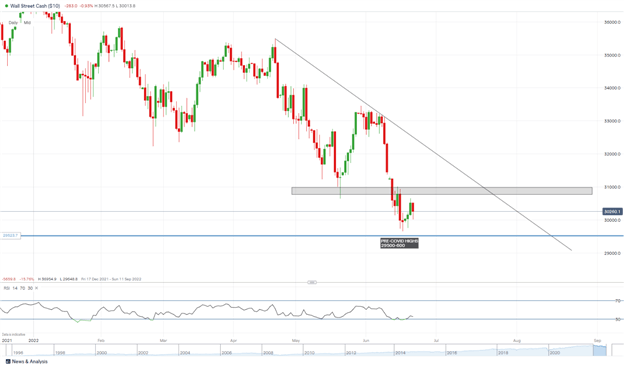 From a technical standpoint, the Dow remains under pressure as it struggled to retest previous support that turned the 30800-31000 resistance zone (grey rectangle on the chart) yesterday. The price is back above the 30,000 psychological level after testing it in the pre-market trade. Any break from here could open a retest of the June low at 29700 or the pre-covid high of 29500.

element. That’s probably not what you wanted to do! Upload your application’s JavaScript bundle to the item instead.