It has been asked, by music lovers of a certain age, “Why don’t the concerts start earlier?” Tomorrow’s work, parenting responsibilities and the perils of old age are frequently brought up in these conversations.

But is this really what we wanted? A rock and roll show starting at 6:30 p.m. is the musical equivalent of a hip dining establishment offering an Early Bird Special so its patrons can get home in time to catch a rerun of “Matlock” on MeTV.

Such was the case with Buckcherry’s Sunday night show at the RISE Rooftop. A notice on the venue’s website read, “Doors 6 p.m. Show at 6:30 p.m. Ends at 11 p.m. Three opening acts were on the bill: Seven Year Witch, Hold On Hollywood and Mirror Lake. Three? Before the show, fans had to wonder if Buckcherry was generously giving up-and-coming bands an opportunity or arranging the situation so they didn’t really have to play that long. As things turned out, it was the latter.

Lead vocalist Josh Todd, the band’s only original member, led a ringing band through a set that – with some filler – stretched to just over an hour. At 52, Todd is still in great shape, the better to show off his tattooed chest. And his voice was solid, despite a reported case of COVID early last week. His movements? Axl Rose would be proud to do such a snake dance these days. But for all of his attributes, what Todd lacks is the ability to invoke even a modicum of irony or self-awareness.

Rock and roll’s top singers – Mick Jagger, David Lee Roth, Steven Tyler, even Robert Plant (that “Does anyone remember the laugh?” thing except) – delivered their performances with a wink. implicit eye to the audience. We all know that’s kinda silly, they seemed to say, but isn’t it great fun? There is no comparable sense of the absurd in Todd. No playfulness. No sense of malice. As a result, his performance sounded rather hollow. As Gertrude Stein used to say, “There is none there.” 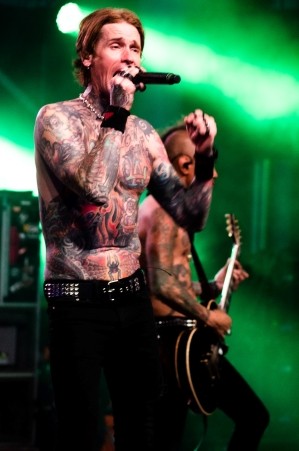 Josh Todd, in all his tattooed glory, flaunted a beautiful voice on Sunday night, despite suffering from a case of COVID over the past week.

Rise (OK, I’ve done their all caps thing once) is an attractive but oddly constructed venue, at least for live music. Its retractable roof is quite high, so as to allow high-end seating in balconies above the ground. However, when a high ceiling is combined with large bay windows and concrete floors, the sound can take on a shrill, shrill character. As a result, Buckcherry’s mix was dominated by snare and cymbals, with precious little low hits. Todd’s voice could be heard for the most part during the songs, but when he spoke, his lyrics were often unintelligible. When Mohawk guitarist Stevie D. ventured into the neck of his instrument, the solos turned into waves of noise, overwhelmed by too much reverb.

Another unfortunate aspect of the space’s design is that there are few backstage areas or wings to speak of on the sides of the stage. As a result – and it certainly presented a challenge with multiple acts on the bill – the roadies had to carry guitars, mic stands, etc. through the crowd to a curtained off area at the back of the venue after each group has finished their performance. Nonetheless, set changes were accomplished quickly, if not efficiently.

Buckcherry’s relatively brief set included hits – the rock “Lit Up” and the power ballad “Sorry” – in addition to the dreaded “songs from our new album”. In fact, the material Hell, released last year, has held up well to the most well-known tunes. The highlight for much of the audience was a chant to “Crazy Bitch,” which also included snippets of “Jungle Boogie” (Kool and the Gang), “Bad Girls” (Donna Summer), and “Proud Mary” ( Creedence Alarm Clock of Clearwater). It sounds better than it actually was. Once again, Todd and his proteges missed an opportunity to inject some much-needed levity into the proceedings.

When the Black Crowes first appeared on David Letterman’s show, performing “Jealous Again” from their debut album, the host was very impressed with the group. If I remember correctly, Letterman told Paul Shaffer: “Now it is get drunk and go home with the rock and roll waitress!” Buckcherry’s show falls far short of that mark. The group is tight and the players are all perfectly adequate. But there’s no joy, no sense of catharsis that the best rock and roll contains. Here, it was just blasé cynicism. Which may explain why the band wrote a song called “Say Fuck It” a few years ago.

Something that doesn’t belong but shouldn’t be left out:

I imagine this has already been pointed out to the owners, but if so, it bears repeating. On Rise’s “Stairway to Heaven”, on which the names of deceased musicians are painted on each step, Janis Joplin’s first name is spelled “Janice”. I haven’t checked, but hopefully Jimi’s last name isn’t listed as “Hendricks”.